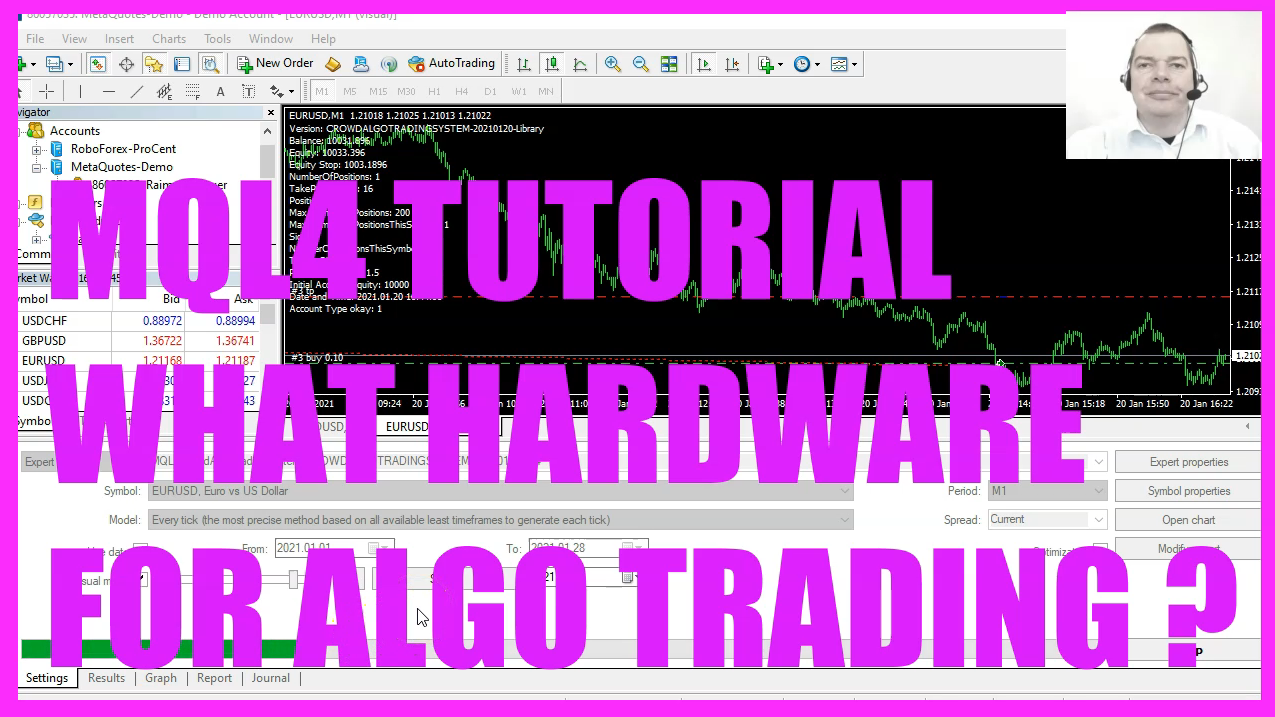 In this video, I would like to talk about one of the questions that I get from time to time. Actually, I am dealing with the whole topic right now, because I’m going to do another experiment in February and therefore I needed to buy a new device. This is the crowd algo trading system. I did a daily video about this new system each day in January. And in February I’m going to do the same live experiment for MQL5. Therefore, I needed to have new hardware.

In my case, I have been coding on the Windows machine and I’m using this virtual machine right now to record this video. But my daily work is done on a Linux machine. I’m using MX Linux, and I think that virtual machines are a very good solution. But if you don’t want to use virtual machines, you can use a software like this, VNC viewer to connect to real machines. I have a lot of them. So let’s connect to this one.

And you will see this is running the Metatrader. I can move the whole application around. And this is a Windows eight machine with two gigabytes of RAM. This is enough to run Metatrader. Now let’s disconnect and open another one. This one is a Windows 10 machine and it’s also running with two gigabytes of RAM on a 32 bit system. By the way, these are both so called compute stick’s. A compute stick is a little device that is a little bit bigger than a usual USB stick might be. It comes with an HDMI output so you can use it on any screen or any TV. And it doesn’t need much space.

I have several of those. They all have two gigabytes of RAM. But for the new system, I decided to use a different solution. This is also a very small PC. It’s a little bit bigger than a cigarette box. You see the pen here. This is also a micro keyboard. So the whole thing would fit in your pocket. And this little device comes with four gigabytes of RAM and windows 10 is already preinstalled. You can get this device for a little over 100 dollars online.

It has several USB ports and an HDMI output. So this is very affordable and this is what I consider to be the coolest version. These are two super small notebooks. You might know that we had this kind of hardware about 20 years ago, but at this time, those little devices came with Windows Mobile or Symbian OS, and you couldn’t do very much because the performance was really bad.

But these two little things here come with a full blown Windows 10 system and eight gigabytes of RAM. That is more than enough to use it for Metatrader. And you also can use them for other cool things, for example, for mobile programming. But they are costly. If you don’t want to spend that kind of money, you could go and buy a used netbook. This device is about 10 years old. It has two gigabytes of RAM. It’s running MX Linux right now.

And with play on Linux and wine, you can emulate Windows programs. So it is possible to run Metatrader on this device. It’s not the fastest solution, but it doesn’t cost very much. You can get devices like this one for 50 to 100 dollars and the keyboard is very usable, but they are a little bit bigger than the last one. When I started out, I had about six of those netbooks on my desk and they did the job very well.

So this is my setup that I prefer. Today I’m running Linux on my desktop PC and this is Windows 10 in the background, running on a virtual machine.

You could run this configuration on your desktop PC or of course, on a notebook.

And when I’m not at home, I also can watch my accounts on this mobile device here. This is an Android phone. I think the mobile Metatrader version is also available for Apple devices. It’s a good way to have a quick look at the current situation, but mobile phones are not able to deal with automated systems. So you can just see your account numbers, but you cannot change anything about your automated system on this device. OK, that’s basically it.

Now, you know what kind of hardware you can use to run Metatrader. That’s all for today. Thank you for watching.