MQL4 TUTORIAL BASICS – 130 WHY MASSTESTING IS A GAME CHANGER 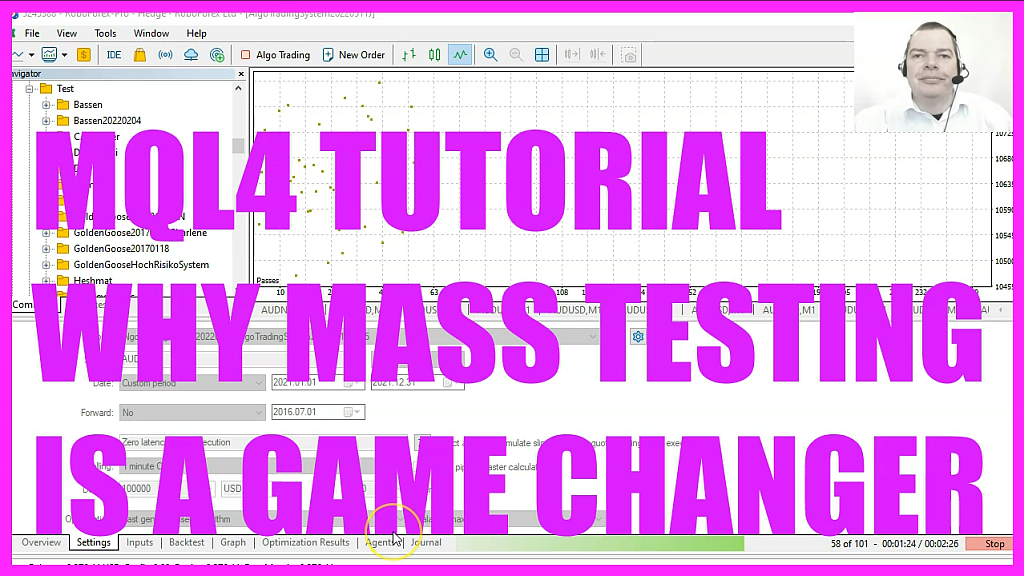 In this video, I would like to show you something that I think is very helpful. And right now you see that I’m doing backtests in MetaTrader 5. Because MetaTrader 5 is able to to do that. And it’s very fast because MetaTrader 5 does support multicore processing. Each of my CPU cores can now do 25 tasks, as I am right now doing 101 complete backtests. And when you watch the results here, you will see that we have profits, and each of those tests has a different amount of total trades and a different expected payoff and a different result.

And that’s because I’m doing it with random entries. Now you might ask yourself, why should anybody use a random entry to do tests? Well, actually, this is a good way to find out if your system works, because not the entry is the most important component. It’s rather how you react. And it doesn’t make sense to make decisions based on a handful of open positions.

So you can see in each of these 101 test series, I have about 3000 total trades. I’m running the test for a whole year. I do it often and this one gave us good results. This is the one that I did before. Those results are also okay as we have no losses.

So the system has time to recover. But what do you think would happen if I said that the backtest should end on September 16th? Well, I think you would be less satisfied with the results because that would have been a loss. And this is where people actually give up. Because when you see something like this happen on a real account, you will be convinced that all that trading stuff doesn’t work, and you will be sure that the system will never recover again.

And those back tests here, actually, yes, they take time, but they don’t take much work. The only thing I do is to pick the next currency pair here. Click on Start. Now I see that the four cores are going to work. Here is the status, and now we see the first results.

Each green point here represents a profit, but it doesn’t mean that it needs to always be a profit, just with a few changes in the system. For example, here in the risk percentage value, I could easily modify the system in a way that it only produces losses. And that’s why I think that the best idea to invest time is to do mass testing like I do with this system. Metatrader 5 is able to automatically import all the historical data that is needed for a test. And by now we have made 86 out of 101 tests so far. It looks good for this currency pair.

Now this test series is finished. This time we have about two and a half thousand trades for each test. The drawdown looks very good. That isn’t always the case. And if you think that 24% is too high, you might want to adjust the settings for your own needs. It really depends on your risk tolerance and your account type.

My account type is good for up to 70% drawdowns as my broker has low margin requirements. Let’s do another one. I have not modified any settings but you really need to find out if the currency pairs you trade will work and I go with the ones that produce good results and I leave out the ones that produce bad results. I always do backtests for at least one year. And when I’m done with all the currency pairs that I trade I will start right over with the year 2020, do 101 tests for each of these currency pairs. And afterwards I will do the same thing for 2019! And that’s how you can do hundreds and hundreds of tests on a single rainy afternoon if you use meter MetaTrader 5. I have to admit I wasn’t willing to change from MetaTrader 4 to meter MetaTrader 5 for a long time. But this mass testing ability and the fact that historical data is imported automatically really saves a lot of time. And we can get a lot of real trading experience in a fraction of the time you would need otherwise. So if you would like to see results like this one, I think you should at least try MetaTrader 5 and do this mass testing thing.

It’s not very hard to set it up. I have some other videos about it. In this video we have done 1, 2, 3, 4 different currency pairs so far. The results look good. Thank you for watching. And I will see you in the next video.