MQL4 TUTORIAL ENGLISH – HOW TO PROFIT FROM A TREND CHANGE 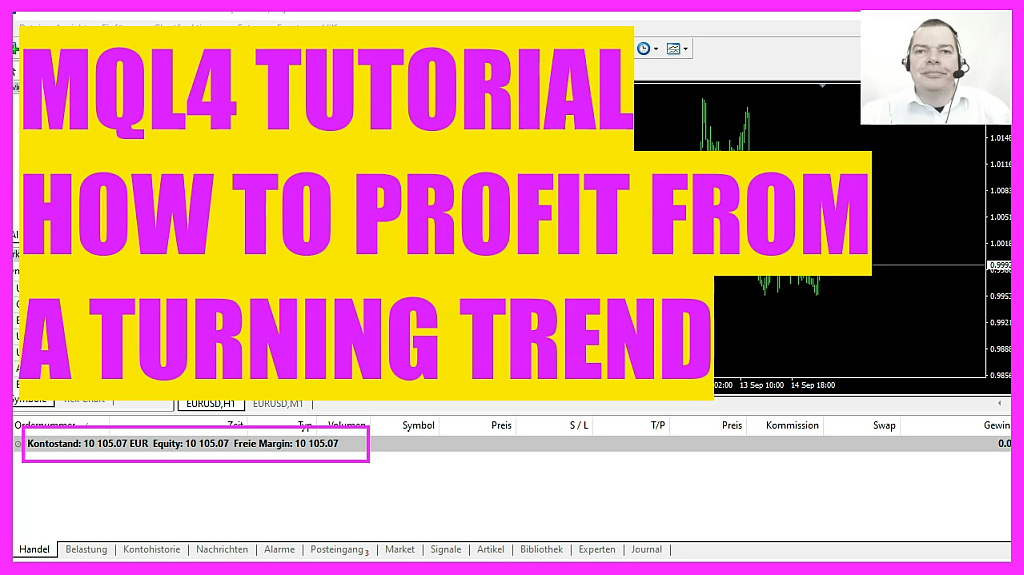 In this video, I would like to briefly discuss one particular situation and that is a trend reversal here. We see two moving averages here. One calculates the value for 1000 candles and the other this red moving average is for 1100 candles. And when that’s up, we have a downtrend. As you can see, it was like that for a long time and predominantly the price moved below these moving averages until that suddenly changed here on September 13. If we zoom into the chart at plus, we see this pretty big candle here and that caused the price to move from one side to the other side of the moving averages. That means because the green moving average is currently above, in theory we have an incipient uptrend. However, because the price is below both moving averages, there is no trading until we have a crossover here or the price moves back to the other side. This has the advantage that we are not trading against the long-term trend.

Even if our own entry signal provides us with buy and sell signals here, we will only trade again when the current signal direction matches the long-term trend. This has worked quite well over the last few weeks. We are now at an account balance of 10,105 5 €. Currently we are in profit here. Who would like, can look at that on the web page PlatinSystem.Org also times more exactly. There you can find the statistics. And we see here just no trading trend, because I have changed the system yesterday again. Because I have taken the situation as an opportunity to set up here above and below the moving average still a transition zone, in which is not traded. This means that if the price moves here in the area of the moving averages, then no trade was opened, because the direction can change again at any time. But if you zoom into the chart and look at this over the last time, you can see that we are already in a pretty stable downtrend. And now it’s just a matter of waiting to see if the trend finally turns.

That would mean the price stays permanently above these two moving averages and the green average stays above. Only then would that be a permanent trend reversal from the descent of the Euro US Dollar. Or we will see another crossover here shortly. At the moment, it looks more like that. That would be a signal that the downtrend continues. And then we would like to continue to act so. Of course, now in the short term, to make things more interesting, we could change the values here for the moving averages. But that’s not the point. Because although the entry signal does not determine whether a system is profitable or not, it is part of a fixed set of rules that should be followed. Just like in a soccer game. There are lines and goals and referees. And no one would show up to a soccer game with flippers and a golf club. That’s why I’m just going to enjoy the quiet time here until trading turns itself back on. I can just drag the system here onto the chart and have it trade with the default values.

And you learned in this simple video how to use two simple moving averages to determine the long term trend direction for your own system so that it will only trade automatically when the long term trend and your own entry signal match. Thanks for watching and see you in the next video.